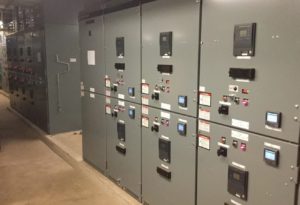 This Main Switchgear Replacement project took place at an active pharmaceutical research and development facility in Montgomery County, PA.  The project budget was $2.5 million dollars and included the removal and replacement of the primary electrical switchgear serving the entire campus. The project started in January 2018 and was successfully completed in April 2018 without injury.

The facility has a dual service (A-side and B-side) electrical feed coming from the utility company, PECO; the dual service feeds are part of a redundant system to keep the power on for the campus in the event of a utility outage.  If PECO were to lose one of its feeds, the switchgear can transfer power over from one service to the other through the main-tie-main switch to maintain power for the campus. PECO provides a 33,000-volt feed to the transformer yard that is located onsite. There is a transformer for each section of the switchgear labeled A-side and B-side. These transformers step down the power from 33,000 volts to 4,160 volts.

In early 2018, Vasoli Electric locked out the B-side of the switchgear to start the demolition of the existing switchgear which left the campus with one feed and no redundant power source to rely on. Before the B- side of the gear could be demolished there was a week of coordination meetings with end users and safe work procedures (JSA’s Permits, etc.) needed to be generated and approved before the start of work.

The process of achieving and confirming zero energy was well thought out and thoroughly documented. This process included Vasoli electricians who are National Fire Protection Association (NFPA) 70E, Qualified Person trained to remove and ground the feed cables on the 4,160-volt side of the transformer; these cables were grounded to prevent energization of the system in the event the 4,600-volt switch was closed.  In order for Vasoli to safely remove the cables they needed to don the appropriate arc flash personal protective equipment (PPE) and test for zero energy. The arc flash PPE consisted of a Category 4 arc flash PPE (40 cal/ cm arc flash suit with Class 00 rated insulating gloves, face shield and hearing protection).  During this activity, a second Vasoli employee who is also NFPA 70E trained and equipped was on standby in the event of an emergency.

Once the main feed to the B-side of the switchgear was locked out and zero energy was provided, the equipment downstream also needed to be locked and tagged out to prevent any back feed of the switchgear to be removed. There were multiple pieces of equipment that were fed from the B-side of the gear spread throughout the campus. An eight hour walk through of the facility including Vasoli, Cyma Superintendents, CD and Associates safety professional, and the facility maintenance department was undertaken to identify circuits and system fed by B-side. A total of eighty-four locks and tags were applied to B-side supplied equipment that posed a back-feed potential.

At this point, the B-side of the gear was ready to be de-terminated and removed off site. After Vasoli had removed all the wiring and associated piping, Thackray Crane was brought in to start rigging the gear out of the building.  The gear was carefully moved from the housekeeping pad to a small courtyard, so it could to be lifted on to a flatbed truck. Thackray provided a 120-ton crane to assist in the removing of the old gear and rigging in the new gear; once the new gear was rigged into the building and set on the housekeeping pad it was ready to be wired and piped in.

Once the B-side of the switchgear was terminated and ready to be energized, the previous steps had to be followed in reverse. The 4,160-volt cables had to be re-terminated and the 33,000-volt transformer had to be re-energized.  Prior to energizing the new switchgear, the manufacturer of the gear inspected the installation and conducted factory start-up testing. Initial energization of the new switchgear represents a potential hazard so following the successful factory start-up of the system, Vasoli electricians again donned Category 4 arc flash PPE to close the switch energizing the transformer and gear.

The same process was followed to demo and reinstall the new A-side switchgear; all of the components downstream had to be locked out again to prevent a possible back feed. This lockout / tagout effort included installing eighty-four locks and tags on the A-side equipment and locking out the 33,000-volt A- side transformer.